Why These ’90s Marketing Trends Need to make a Comeback! 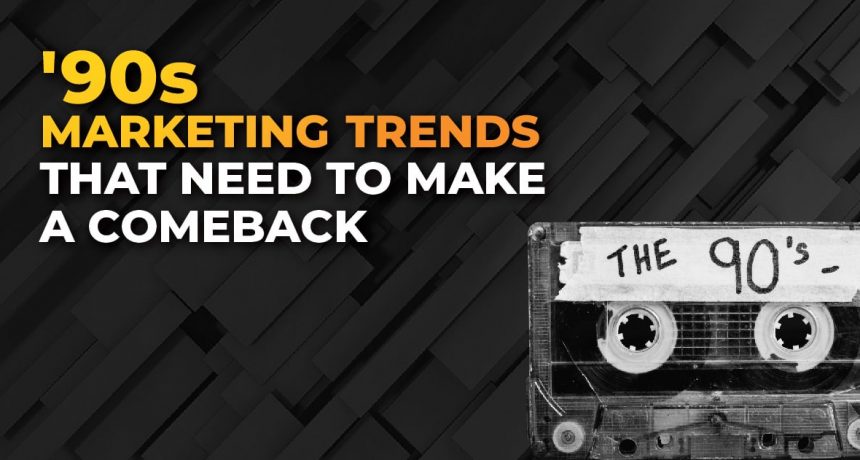 It’s hard to fathom a world without social media and smartphones, but if you grew up in the ’90s, that’s what it was all about! Being a kid in 1995 meant putting on your favourite lime green bike shorts, eating the most sugary cereal in the cupboard (think Count Chocula and French Toast Crunch). You then spent the rest of the day roaming the neighbourhood on your shiny new rollerblades.  Although the “World Wide Web” made its appearance in 1993, the advertising space of the ’90s wasn’t internet heavy.  We are going to take a trip down memory lane with some of these 90’s marketing trends that might need to make a comeback!

90s Marketing trends showed teens they had more influence than they thought. It was impossible to flip through the latest issue of CosmoGirl or Seventeen Magazine without seeing your favourite celebrity with a milk-moustache.  From pop divas like Britney Spears and Beyoncé to rock icons like Steven Tyler, the “Got Milk” craze lured in celebrities from all backgrounds.  It would almost be shorter to write down the list of celebrities who didn’t make a milk-moustached appearance.  Even fictional characters like Kermit the Frog and Garfield the Cat sported a milk-moustache! The “Got Milk” is equivalent to what we refer to today as ‘going viral’ and we would love to see this type of celebrity-endorsed collaboration again.  How else are we going to get Beyoncé and Steven Tyler in the same room?

There is no denying that television commercials from the ’90s were a lot of fun! They always featured high-energy kids, dancing cartoon characters and vibrant colours.  If you were from a health-conscious family, you were probably the exception rather than the rule. 90’s kid’s cuisine was defined by sugary snacks.  With these sugary snacks came some of our favourite commercials that combined cartoon characters, catchy tunes and happy families.

The power of mascots

Remember Dunkaroos? The commercials would feature the kangaroo himself reaching an extendable cartoon arm and snatching the Dunkaroos from the laughing kids!  (They’re back by the way). How about Fruit Gushers or Kool-Aid?  Commercials would show kids eating a Fruit Gusher in the mall and then immediately their heads would turn into a giant cartoon fruit. In another, they’d open a Kool-Aid package and the Kool-Aid man himself would come crashing through their wall…ooooooohhh yeah!  Snap, Crackle, Pop. The Trix rabbit. Captain Crunch, Toucan Sam, Tony the Tiger, The Green Giant, The Stay Puffed Marshmallow Man… I could go on forever. We would love to see more of that energy the 90s mascots brought in today’s marketing trends because 90’s excitement could always bring a smile to your face.

Jingles you can’t help but sing along with

Although spandex bike shorts have made a comeback, we are fine with leaving the acid wash, butterfly clips and Sony Discman’s to the 90s.  What we would love to capture is how noticeable the branding was and how engrained in our memories it has become. What about Juicy fruit or Chia Pet. Ask anyone “what is the best part of waking up” and, if they were around in the ’90s, they’ll probably reply “Folgers in your cup!”

Want to infuse some 90s marketing trends excitement in your branding? Ask us how!

Get Marketing and Branding Tips

Straight to Your Inbox!

Are you constantly looking to improve your business?
Sign up to our receive our BRAND SCIENCE newsletter to get non-spammy, straight up helpful and relevant tips for your business, straight to your inbox on Mondays.

Ready to level up?

Let’s start by having a conversation about your business, your project, and your goals so that we can help your reach them.

Starting with strategy, we work with service-based businesses like yours to create strong brands that, stimulate business growth, create confidence-inspiring marketing materials and help you reach your goals.

Our Services
How we can help you

What We're About
Get to know us

Not quite ready to get started?

Check out some branding and marketing tips in our blog and resources section Brand Science.

Let's talk about your Project

Let's talk about your Branding Project